SOME THOUGHTS ON BECOMING, BY LAURA JANE WILLIAMS 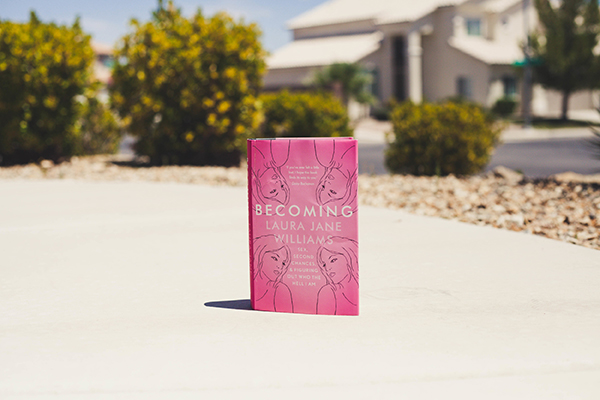 I’m a little late to the game, though maybe not, seeing as this book isn’t yet available in the US. I waited something like four weeks from the release before I simply couldn’t take it anymore. So I ordered it from Amazon.uk, and when I saw the total (with the exchange rate and shipping), I sucked it up and hit order.

I sure don’t regret that. Not one bit.

It’s been almost over two weeks since I finished reading Becoming, and I still feel as though I can’t quite put into words how it made me feel. I was underlining sentences and marking up the margins with asterisks and jumbled notes to myself. I even wrote notes on scrap pieces of paper, like this one, which so well sums up how this book made me feel.

I saw a lot of myself in this book — and in Laura. Maybe not all of the sex (though there was some of that, too) but the desperate desire to find myself and my place in the world. In many ways, I’m still working on that.

I haven’t read many reviews of the book, but I know what people are saying: that’s it’s all about dirty sex and promiscuity. I’m not going to say that isn’t a big part of it, but that so many people are taking only that away from the novel is an absolute shame.

Becoming is about a woman’s journey to find herself after she was broken. And as we all know, that can be a long and messy road.

I’d followed Laura’s blog for a few years before reading Becoming, so I knew what I was getting into. Except, I didn’t really, because she blew me away. Her writing blew me away. And while the book didn’t have the WOW ending that one might expect from a memoir, as a reader, it was enough to know that she could go through all she did and come out on the other end standing tall. That is her WOW.

And that was more than enough for me.

MY READING LIST FOR THE REST OF THE YEAR.